Some interesting thinking from Youngstown, where city leaders have apparently decided to “stop trying to return [the city] to its glory days as a city of 170,000 people and instead embrace the idea that maybe smaller is better.” Smaller, in this case, means the city has now adopted an official goal of retaining the 66,000 who are left.

There is apparently a CDC called the Youngstown Neighborhood Development Corporation tasked with “identify[ing] the healthiest neighborhoods and fix[ing] up the houses there, while demolishing abandoned ones and finding new uses for the land.”

But anyway, I clicked on this article in my Facebook feed because of this picture: 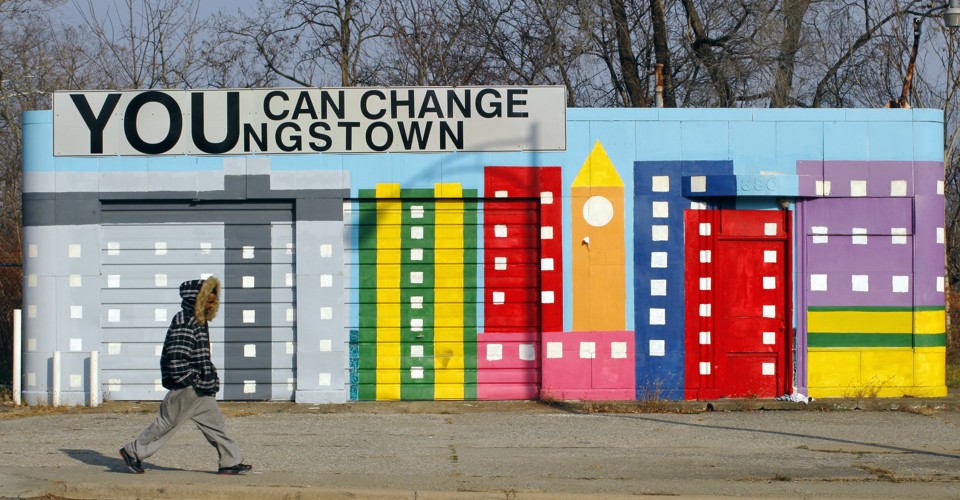 It jumped out at me because it reminded me of something I’ve been hearing at various meetings and conferences where the subject of what I guess one could call West Virginia’s “shrinkage” comes up. Basically, it’s the idea that—not to overlook the very real pain that this shrinkage is causing—there is a bright side. That is, for the right kind of person, it can be very exciting to be in a place where the future is very much an open book—very exciting, that is, to feel like you could be one of the authors.

In a recent email exchange, I asked Natalie Roper, director of Generation West Virginia—an organization working on attracting and retaining young talent in our state—what it is about the current moment in West Virginia that is appealing to so many creative, entrepreneurial young people. Here’s what she said:

“I think it’s the potential, that feeling of being a part of something big in West Virginia as we start to reimagine our self as a state in this economic transition. According to The Young and Restless in a Knowledge Economy, a CEOs for Cities report, places with a sense of possibility and where new ideas are welcomed are more likely to attract and retain young adults. There’s an urgency paired with a sense of excitement in the possibilities that leads a work environment that’s inspiring and invigorating. That opportunity to be a part of choosing West Virginia’s future is incredibly appealing to this impact-driven and entrepreneurial generation.”

That picture from Youngstown looks like a piece of a marketing campaign aimed exactly at young people with this kind of mindset. Maybe our state needs to take a look at the Youngstown plan. Maybe this is our pitch: “YOU can help build the West Virginia of the future.”